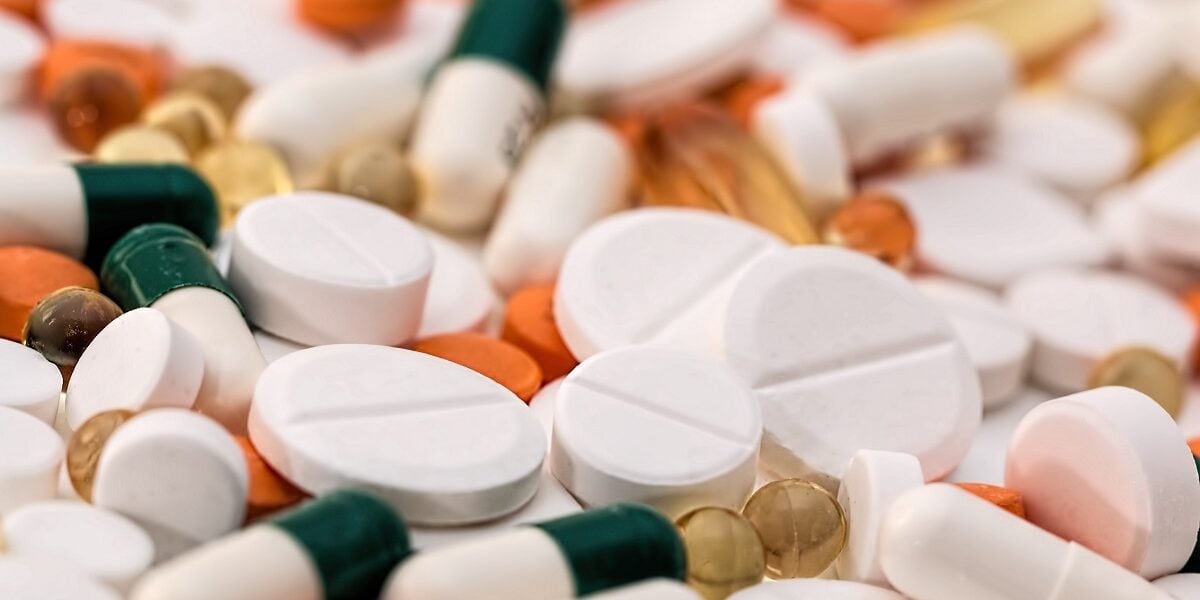 College is an exciting time for many teenagers who typically get their first chance to live independently and make their own decisions during these years. For many students, college is also a period of self-discovery and of building their own beliefs and motivations free from the expectations of parental figures.

Unfortunately, the freedom that college brings coincides with a period when teenagers are willing to experiment with new ideas and experiences. As such, they may become more vulnerable to peer influence and the belief that college is a time to let loose and party (Cui & Fincham, 2010). And when indulgence and self-discovery go unchecked, teenagers may suddenly find themselves exposed to experiences such as drug use and substance abuse.

This post aims to collate and discuss key college drug abuse statistics. The goal is to bring to light figures and data that can help students, parents, and educators proactively understand what constitutes substance abuse in college. All in all, this should help parents and educators recognize, understand, and combat drug abuse in college. Besides, the information will help students keep their own behavior in check and prevent drug abuse from affecting their academic performance

Drug abuse is a menacing issue that has held hostage the lives of many young adults. As you will notice, nearly half of young adults are grappling with drug abuse (Schulenberg et al., 2018). In addition, data show more than 17.4 million adolescents and young adults between 12-25 years of age in the United States are illicit drug users (Substance Abuse and Mental Health Services Administration, 2018).

According to a Monitoring The Future study on drug abuse, the problem begins as early as the 8th grade and gathers pace in the 10th and/or 12th grades before becoming full-blown in college (Schulenberg, et al., 2018). The same study found that college students are the worst-hit among all school goers. And, interestingly, female students are slightly more likely (by 0.2%) to use drugs than their male counterparts.

Further, the study intimates that gateway drugs ring the minds of college students with a better percentage, showing an inherent liking for marijuana and alcohol. But this doesn’t mean hard drugs like cocaine and heroin are out of the equation.

The following statistics reveal the annual prevalence of illicit drug use among college students:

College is, without a doubt, one of the most common places illicit drugs are readily found, sold, and abused. As students leave the safety and security of their homes, they undergo incredible challenges and begin to transition to adulthood. This happens in a new environment, which, even though it is labeled a “drug-free zone,” can sometimes prove to be the exact opposite.

As a result, students who are already into drug abuse get increased opportunities to escalate the behavior. On the other hand, those with clean slates are welcomed into sororities and fraternities famous for partying and episodes of hazing, which often involve drug abuse.

According to Hernandez & Nelson (2010), the most misused prescription drugs among college students in the U.S. are:

Although many drugs are frequently used, alcohol remains the substance of choice for many college students (Schulenberg, et al., 2018). But, according to the National Center on Addiction and Substance Abuse at Columbia University, there is a rapid increase in marijuana, cocaine, amphetamines, and other illicit drug use (McClellan & Stringer, 2011).

Speculation aside, this section aims to lay bare facts and data about the most commonly abused drug in college. It culls relevant statistics from reputable organizations to paint the complete picture of the college drug abuse scene. 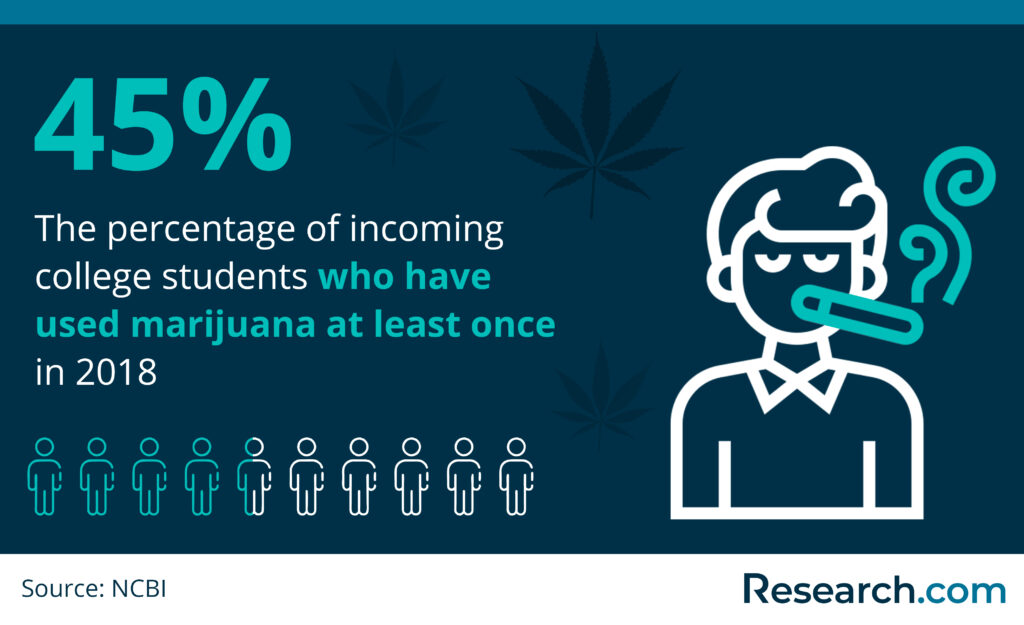 Rate of Adderall Abuse in Male vs Female College Students 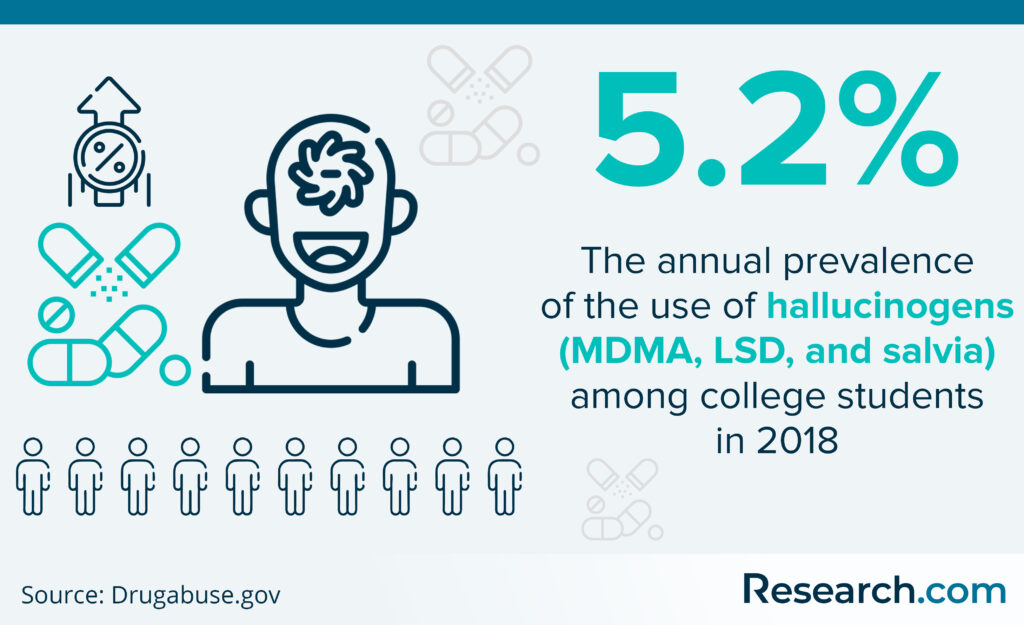 Studies indicate that alcohol and drug use among college students can result in poor academic performance and increase the risk of sickness, injury, or death (Cremeens et al., 2013, as cited in Hellenbrand et al., 2018).

Percentage of respondents who drank within a month

Why Do College Students Use Drugs?

Beyond learning and planning for the future, college is about testing the limits and partying for many students. But, finding the perfect balance between the two often proves to be a stern challenge, especially with the increased responsibilities that come alongside the new-found freedom.

As studies get tougher and myths become more prevalent, the socialized thinking that substance use is normal, natural, and expected part of being a student becomes the new norm (Cuban, 2017). Consequently, students begin to find solace in substance use for multiple reasons.

This section provides some of the key factors that propel college students towards the dark world of drug abuse.

Attitudes and Beliefs About Drug Use Among College Students

Attitudes and beliefs influence whether a college student will use marijuana, alcohol, or any other illicit drug. Particularly, the extent to which they believe that using a specific substance in certain amounts or frequencies might harm them has an impact on the use of a particular drug (Schulenberg, et al., 2018). By looking at the shift in attitude and beliefs, parents and educators can foretell changes in actual drug-using behavior among college students.

This section gathers data about the attitudes and beliefs of young adults—people between 18 and 30 years. While the data isn’t specifically focused on college students, it offers vital insights into a critical age group that mostly constitutes the college-going population. As such, the results can be extrapolated to college students to get a sneak peek into their attitudes and beliefs about drug use.

Personal Disapproval of Drug Use 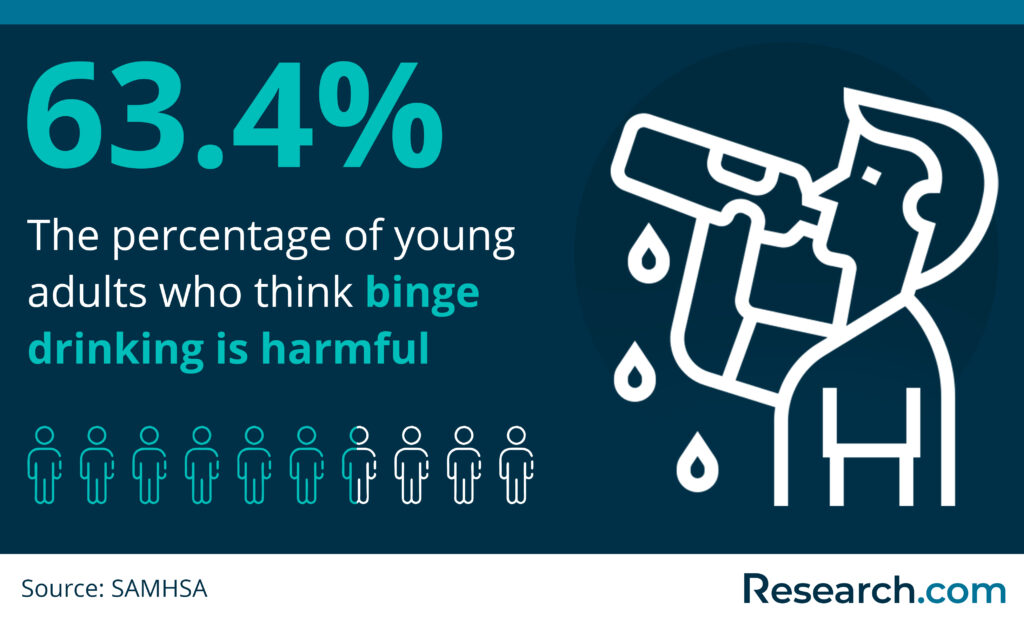 College time means students have to leave the confines of their parent’s guidance and explore the world independently. This means building a new support network that mostly includes peers who share different opinions, beliefs, and attitudes about life, studies, and drug use. This creates a peculiar social context with unique norms and modeling that impact the likelihood of a student using or abstaining from the use of drugs.

Much like the previous section, this part explores the social context in which young adults aged 18 to 30 years find themselves. But, since the data covers a demographic that comprises college and university students, it’s relevant to this post. The statistics reveal important insights on direct exposure to substance use by friends and the perceived availability of drugs among college students.

The Extent of Student Exposure to Drug Through Peers

The Degree of Young Adults' Exposure to Alcohol Use

How many young adults have friends who drink alcohol?

Habitual choices are highly likely when youths act in familiar circumstances where there is a strong correspondence between personal and perceived moral norms of the setting (Piquero, 2015). Choices, however, have consequences that can be limiting or enabling. In this sense, college students who choose to abuse drugs open up the possibilities of limiting consequences.

The choices students freely make become a significant part of the context for the next set of actions. Consequently, some begin to skip class and spend less time studying, which ultimately results in lower grades. In some extreme cases, drug abuse can lead to dropping out of college. It may even lead to student crime such as sexual assault. 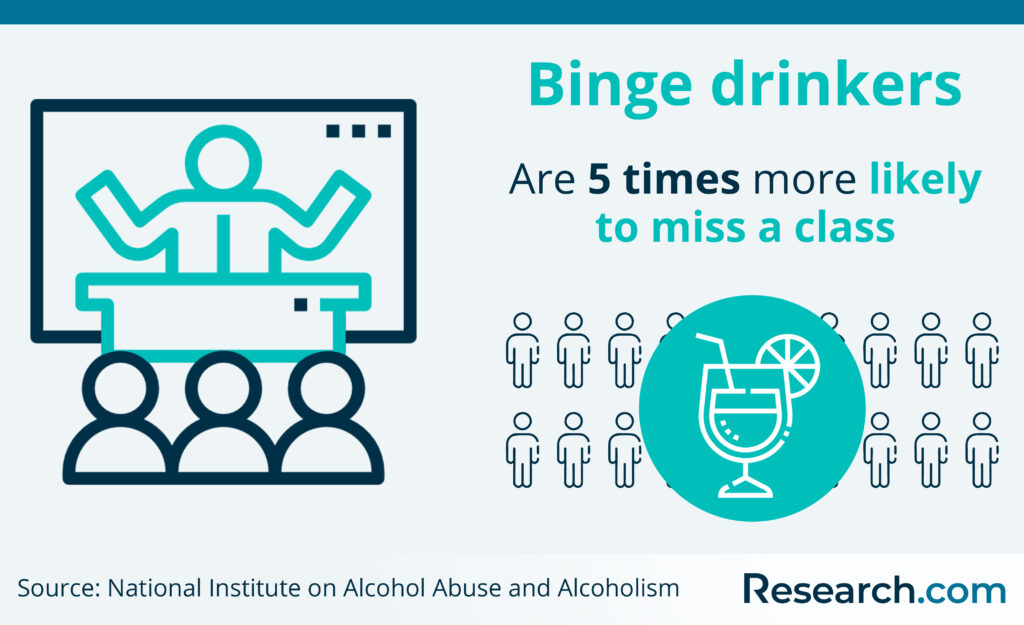 Drug abuse among college students is prevalent, and responding to the risks caused by this vice has been a monstrous task for parents, students, and educators alike. The use of illicit drugs and inappropriate use of licit drugs have continued to torment college students for years now. This has been going on despite the rigid disapproval of the use of drugs by a good number of young adults.

As highlighted in this post, excessive freedom blended with peer influence and school-related stress has played a huge role in escalating drug abuse on college campuses. In this case, learning how to reduce stress during college may prove to be useful to students who want to remain abstinent during their studies.

But truth be told, many of the factors that propel students to the dark world of drug abuse are entirely preventable. The success of the prevention measures, however, solely boils down to the collective effort of educators, parents, and community leaders. For parents, it may start out as early as childhood, with properly talking to children so they grow up with the right attitudes about themselves and the world around them.

Parents ought to extensively research and learn the major risk factors for drug abuse, so they can explain them to their children in black and white. In addition, when students join college, parents should take it upon themselves to keep close tabs on the child’s life, know their new friends, and monitor behavior and attitudes keenly. On the other hand, educators and community leaders should be more proactive in their thinking, selection, planning, and delivery of prevention programs.

The National Institute on Drug Abuse outlines 16 principles that schools, parents, educators, and the community at large can use to prevent drug abuse among adolescents and young adults (National Institute on Drug Abuse, 2003). These interventions help reduce or reverse the risk factors and enhance protective factors to curtail drug abuse. Stakeholders should not stop at this because the drug abuse scene is continually evolving. As such, parents and educators must endeavor to conduct rigorous research and create innovative ways to halt it. 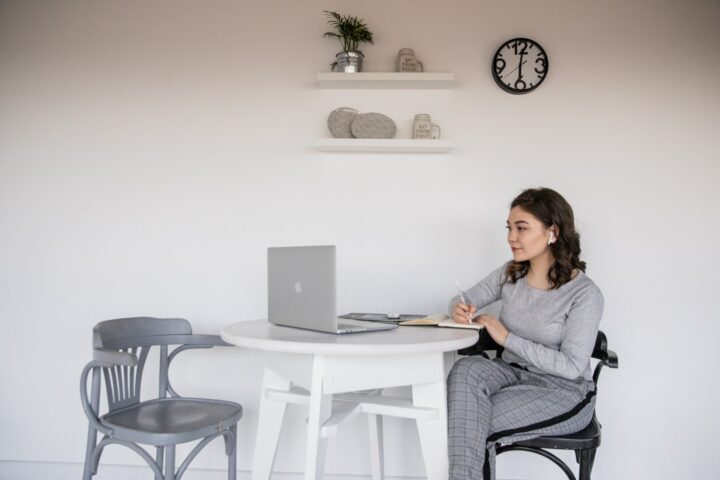 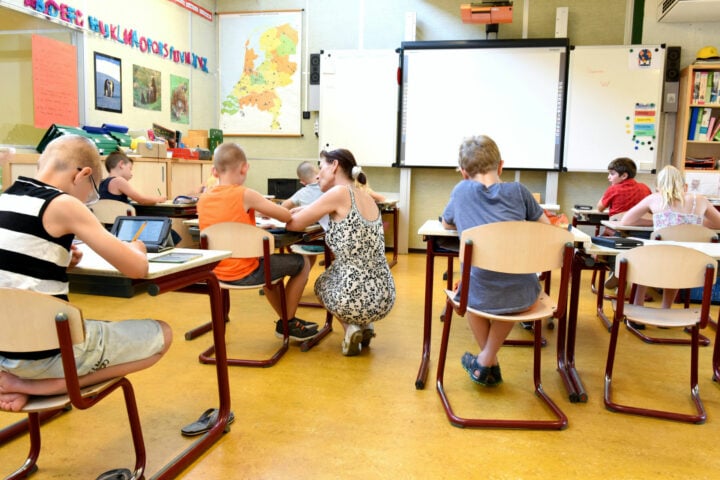 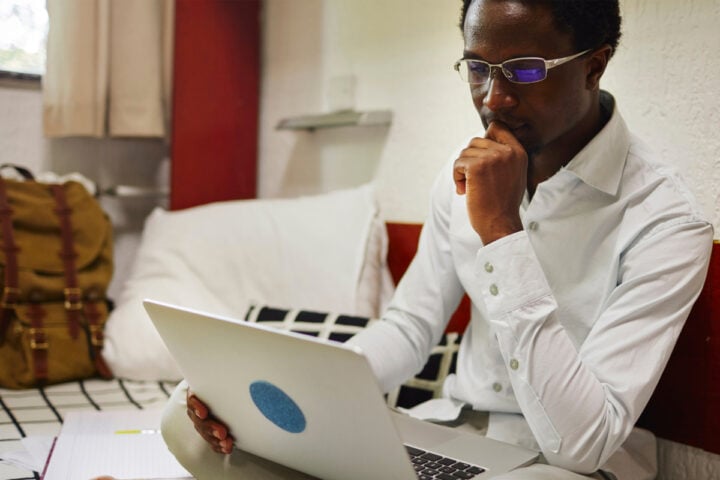 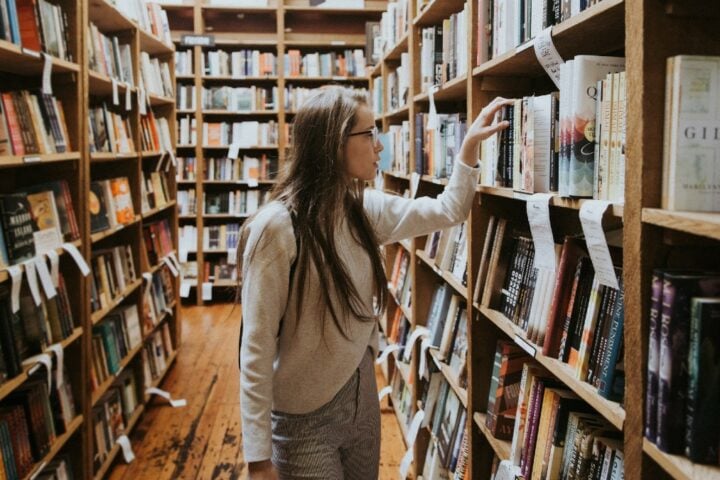 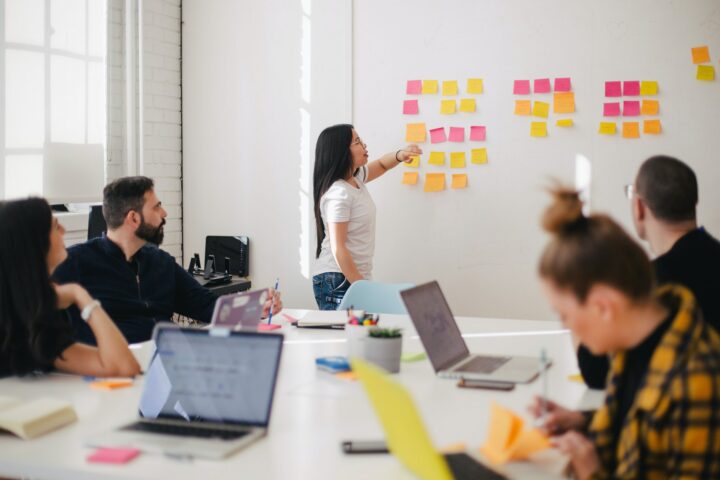 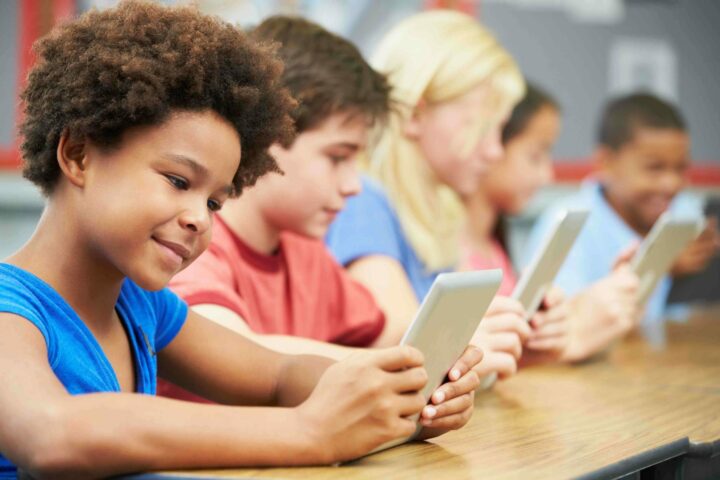 What is Mastery Learning Model? Definition, Principles, and Examples 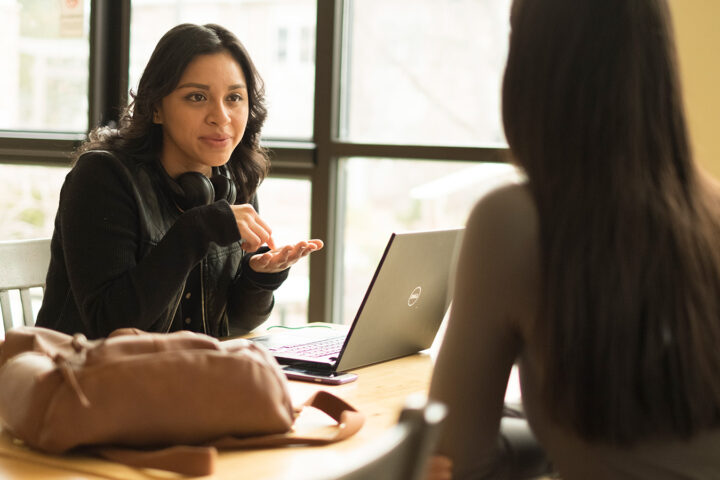 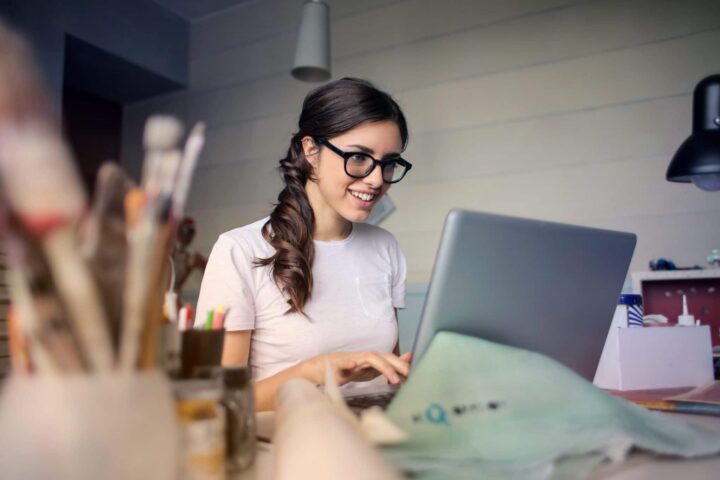 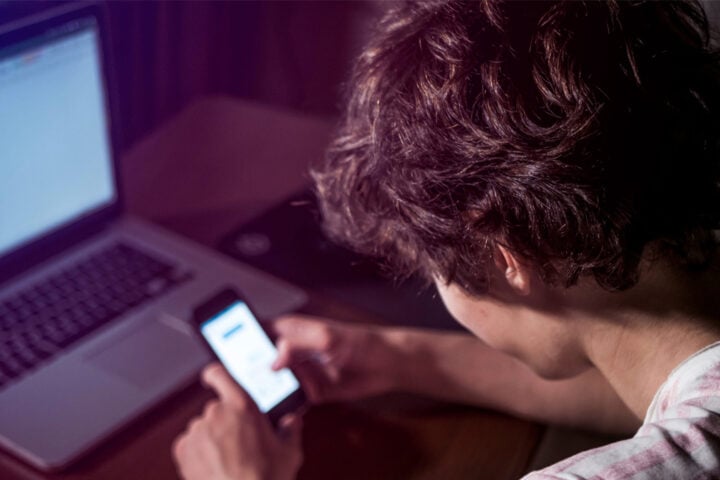 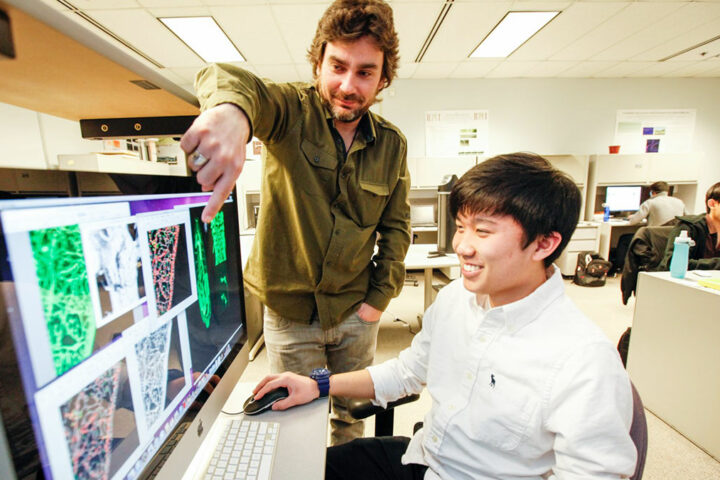 What Is Research Data Management (RDM)? 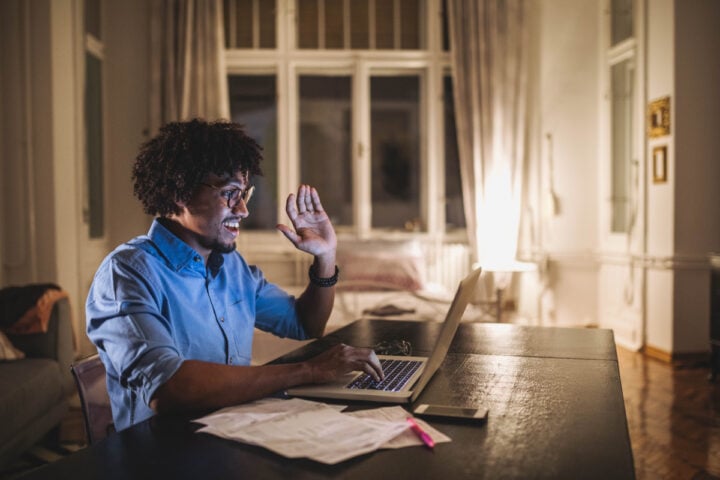 Most Affordable Online Colleges: Guide to Online Programs for 2023