Varying usage of the terms school, college, and university causes a lot of confusion for students and parents. For international students who want to study in the United States, not knowing the difference between these terms can affect their decision on which institution to apply.

In this article, we tackle the key differences between a school, college, and university in the USA. By knowing how they are defined, their distinctions, and what subtypes of institutions are under them, local and international students can make informed decisions on where to pursue their education.

School vs. College vs. University in the USA: Table of Contents

The terms school, college, and university can mean different things depending on where one is from. In the United Kingdom for instance, colleges refer to schools found within a university. You will also hear students say “going to uni,” which is British slang for attending university (Lempiäinen, 2017). Meanwhile, in Canada, college usually refers to a vocational, artistic, or technical school offering tertiary education, while in Australia, it refers to secondary education (College Rank, n.d.).

Now you might be wondering “What is the difference between a school, college, and university in the USA?” The quick answer is that a school can refer to any institution that provides learning. On the other hand, colleges are institutions that generally offer undergraduate programs while universities have both undergraduate and graduate offerings. Universities tend to have bigger class sizes than colleges and focus more on research than teaching (Epps, 2020). Lastly, a college may also refer to the broad fields of specialization comprising a university. Hence, most universities have a College of Liberal Arts, College of Engineering, and College of Education.

What is a school?

According to Merriam Webster, a school is “an organization that provides instruction.” Thus, it can refer to educational institutions that cater to both children and adults. It can also refer to a college or university. Within universities, there are graduate or postgraduate schools, such as business schools or law schools that confer advanced degrees (Study in the USA, n.d.).

It is interesting to note that the word school is derived from the Greek word scholē, which means leisure. For the Greeks, a life of leisure gives one the opportunity to think and explore things, which eventually led to the word’s usage in the educational context (Merriam Webster, n.d.).

There are many types of schools in the U.S. However, the most common ones are public schools or ones that receive federal or state funding where students can study for free. In contrast, private schools do not receive government funding and so charge students with tuition to run their operations (Chen, 2019). Based on 2018 data, there are 91,276 traditional public schools; 32,461 private schools; and 7,193 public charter schools.

Adding to the variety are schools that adjust their curricula to their students. For example, there are special education schools that cater to students with disabilities; magnet schools that focus on certain fields like the arts or science, technology, engineering, and mathematics (STEM), or put emphasis on a particular teaching style like Montessori schools. There are also vocational schools that emphasize offer skills and training (Chen, 2019). Lastly, there are alternative schools which don’t provide the usual educational experience. They are mostly meant for students who have had difficulties in regular schools due to behavioral issues or learning disabilities (Barrington, 2019).

What is a university?

A university is defined as “an institution of higher learning providing facilities for teaching and research and authorized to grant academic degrees.” It is composed of an undergraduate division that awards bachelor’s degrees and a graduate or professional school, which grants master’s or Ph.D. degrees (Merriam Webster, n.d.). The word “university” comes from the Latin universitatem, which is a shortened form of the Latin phrase universitas magistrorum et scholarium, meaning “community of masters and scholars.”

Compared to colleges, universities are larger institutions with bigger class sizes and more expansive and diverse curricula. Because of their broader offerings, universities can have multiple schools under their umbrella (Wellman, 2017). Larger universities can be divided into colleges offering various programs of study (Epps, 2020). Universities also come equipped with facilities and laboratories that help expose students to the research process and get them involved in research opportunities (CollegeChoice, 2020). 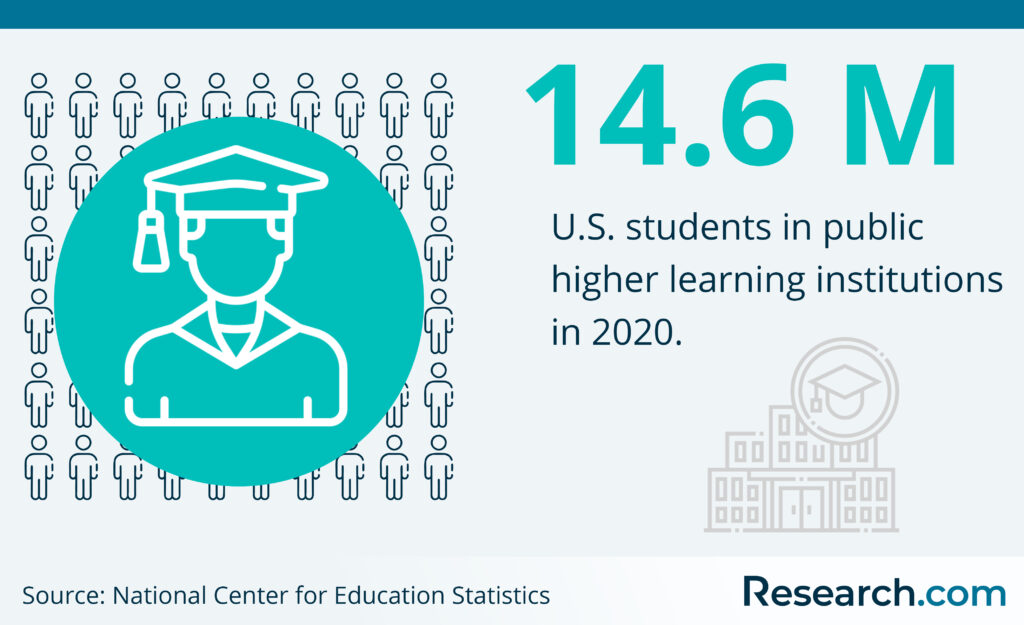 What is a college?

The Merriam Webster dictionary (n.d.) defines college as “an independent institution of higher learning offering a course of general studies leading to a bachelor’s degree.” It can also refer to “an institution offering instruction usually in a professional, vocational, or technical field.”

The word “college” is derived from the Latin word collegium, which means society. Its first recorded usage referred to “a body of clergy living together.” However, the word eventually evolved to mean “any degree-giving educational institution (Online Etymology Dictionary, n.d.).”

In the U.S., the term “college” is used to refer to higher education in general and is used interchangeably with “university.” Both colleges and universities confer students with bachelor’s degrees (Ross, 2018). However, they also have key differences. For one, colleges tend to be smaller institutions that generally offer one type of degree level. Two-year colleges, for instance, have programs for associate degrees while four-year colleges offer bachelor’s degrees. Colleges generally have smaller class sizes than universities. As a result, colleges mostly focus more on teaching rather than research and students can interact closely with professors and academic advisors. They are also further divided into academic departments, unlike universities, which have schools for different types of majors (Lindsay, 2019).

A college can achieve university status when it meets requirements related to the institution, programs, resources, and state accreditation (College Rank, n.d.). However, there are institutions that are technically universities but use “college” in their name simply out of tradition. Examples include Dartmouth College, Boston College, and The College of William and Mary (Lee, 2020). They all offer graduate and professional degrees despite being called colleges (Lindsay, 2019).

College types include community colleges, liberal arts colleges, and technical and vocational colleges. Liberal arts colleges are characterized by small class sizes and employ a broad approach to knowledge, especially in the humanities and social sciences. Then there are community colleges, also known as junior colleges, where students can complete two-year certificates or associate’s degrees. They can then have the courses they have finished accredited to complete a four-year degree at another college or university. On the other hand, technical or vocational colleges, also called trade schools, have skills-based rather than a general education curriculum.

Summing Up the Points of Distinction

The terms school, college, and university take on different meanings, depending on where one is from. In the U.S., they are interchangeably used in popular conversation. However, they have distinct meanings when used in the technical sense.

For one, school is a broad term and includes any institution meant for learning. Thus, it encompasses primary, secondary, and tertiary education. Schools can either be public or private. In addition, the terms college and university both mean institutions offering tertiary education, but colleges usually offer undergraduate programs only and have smaller class sizes. College subtypes include liberal arts colleges and community colleges. On the other hand, universities offer both undergraduate and graduate programs and have facilities devoted to research. Universities can also be subdivided into colleges based on programs of study, especially large ones. University subtypes include public universities, private universities, research universities, and teaching universities. Knowing these key differences is helpful in choosing the right institution to enroll in.